I'm giving away five paperback copies of my book, Outspoken.  Click on this to enter!


See the giveaway details
at Goodreads.

On Writing and Not Letting Self-Doubt Win

It took me two years to write my first book, Outspoken.  The biggest reason why it took that long was self-doubt.  I'd hit a place in the writing where something in the plot eluded me, or my dialogue was crap, or I was just sure it was never going to come together.

What I did during those times was to put it away.  I'd close the file and go watch tv.  Or read a book that somebody better than me had actually finished.

Two weeks or maybe even two months later, I'd get back to it.  I'd go along merrily for a while, until I came to a place, again, that challenged me, and I'd quit for a while.  Repeat until the first draft was done.  That took eighteen months.

Then I discovered the joy that is revision.  I'm not being sarcastic, I love revision.  Reworking the words, plumping up the words, building the words into something I loved.  Revision is where it's at for me.

For six months, I worked nearly every day on the book.  I had a little self doubt during those months, but instead of being discouraging, that particular self-doubt was borne of a reader's eye and let me know when a scene wasn't working.  So I listened to it and revised until I had it right.

So, that book is done.

Which meant it was time to write another book.

Before I began, when I was just at the stage where ideas swirled around my head and my fingers itched to get started, I thought about what would make the first draft less painful this time.  I wanted to ensure that I didn't take two months off because I was discouraged or simply couldn't think of anything to write.

I decided to plow through the tough stuff so I could get to the golden delight of revision.

I set the goal of writing 1,000 words every single day of July and August.  I printed out a calendar to cross out the days when I succeeded.  I used a purple marker. 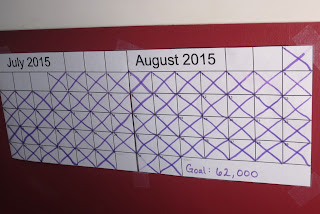 I haven't taken down those calendars yet.  I may leave them up forever.  At the end of August, I had 65,000 words written.  I probably won't leave the ending where it is, and it's messy.  Very messy, even for a first draft.  But it's a mess I can clean up.  I can do the organizing and the scrubbing and the tidying.

It will take a long time, but it won't take two years.

In writing my first novel, I learned not to take the first draft too seriously.  I learned that personally, I need to power through the first step so that self-doubt doesn't have a chance to grow roots.

My kids are eleven and seven.

And actually, my son is almost twelve.  This year he marched in the Fourth of July parade with his bagpipe band.  He has been taking lessons for almost two years, and is just about ready to get on the pipes.  You learn to play, and practice, on a practice chanter.  Anyway, here he is marching in the parade holding the banner. 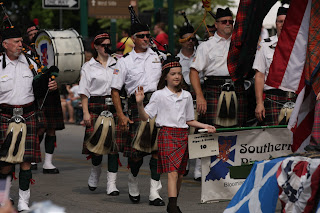 The man on the far left of the picture is Ully, his teacher.  He is patient and encouraging, and after spending so much time with him, like another grandpa.


My daughter is seven.  She has developed a passion for gymnastics.  She's always jumping and flipping and bending in crazy ways.  Here's a video.


We are still homeschooling.  They are in sixth and second grades.  It still works really well for us, and we love the flexibility.

It's Sunday today, so we will spend it reading, writing, playing, and working on projects around the house.
Posted by Lora at 9:41 AM 7 comments:

I Wrote a Novel. It feels amazing and also scary.

Hi.  Long time, no see.  There are various reasons why I haven't posted here in two years.  The biggest reason is that I began to write a book.

That endeavor took my daily allotment of writing energy and time, that's part of it.  But mostly I didn't want to tell people that I was writing a book.  I wanted to keep it to myself to see if I could actually accomplish it.  Writing my blog but leaving out such an important part of my daily life didn't feel good to me.  So I apologize for my long absence.

Now that the book is finished, and published, I feel like I can write here again sometimes.

So the book I wrote is a young adult coming-of-age fiction story.  It contains romance, family, friendship, and general life things. 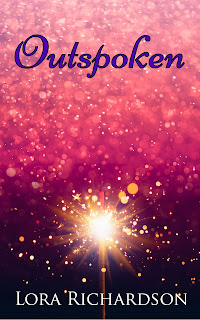 Here is the back cover blurb:


Penny Beck is a girl who says yes when she means no.  She keeps to herself, follows the rules, and does what she’s told.  After a disastrous experience with her boyfriend, she's determined to change from the spineless person she’s always been into the strong woman she wants to become.  All she needs is a little practice.

On a cross-country trip to check on her grandpa, she strives to become bolder and more outspoken with the strangers she meets.  Penny's plan is to practice saying and doing what she wants without worrying about what anyone else thinks.

Then she meets Archer, an introspective loner to whom she finds herself drawn.  She realizes she does care what he thinks, very much.  Will Penny be able to stick to her plan, or will she revert back to her people-pleasing ways?

Here is the link to the Amazon page, if it sounds like something you'd like to read.


Soon I will do an update post on my life, and tell you how things are going.  It feels good to be back!